Ebola is a viral disease that is highly fatal and has been found to be caused by wild animal to human transmission. In humans, the Ebola virus spreads from one person to the other when various body fluids such as blood from an infected person comes into contact with the blood of a healthy person.

An individual may also be affected by the Ebola virus when they come into contact with an infected surface or item. 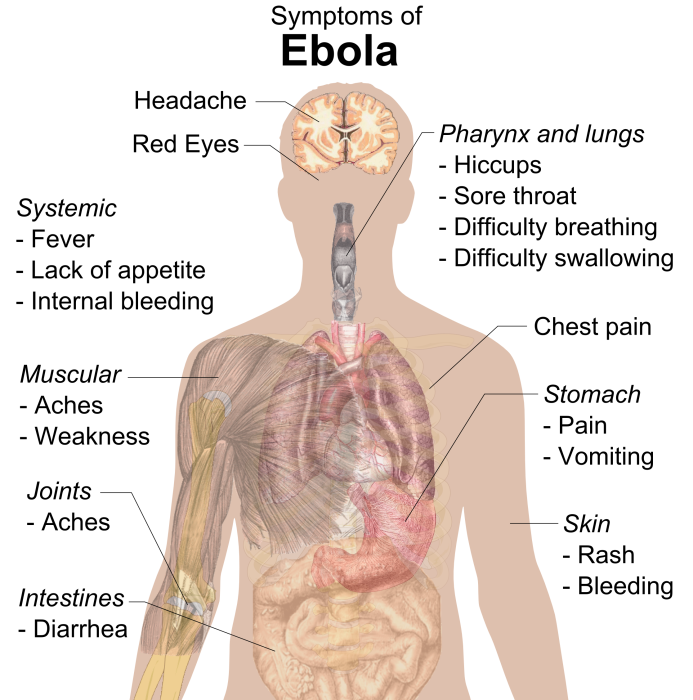 Currently there are five species of Ebola viruses that have been identified and they are:

Of all the viruses listed above, the Zaire virus is known to be the most dangerous and is responsible for several large outbreaks around the African continent.

According to medical researchers, the disease is recorded to have infected the first patient in Sudan around the Nzara region. This occurred in 1976 and the strain of virus that infected the patient(s) was the Sudan virus. A total of 284 people were infected while 115 died due to Ebola virus signs and Ebola symptoms.

Another outbreak occurred in Zaire present day Congo Kinshasa, where a school teacher was infected and died after 14 days. The area where patient zero was found is near the Ebola River which lead to the naming of the virus.

The 2014 outbreak is by far the largest and is known to have affected patients in more than 5 West African countries namely Liberia, Sierra Leone and Guinea among others. The disease has spread from one country to the other from one air traveler and one road traveler. Doctors and international organizations around the world, have invested their time and expertise to help in eliminating the disease.

Signs and symptoms of Ebola

Once a patient is infected, there are several signs and symptoms of Ebola that they display and some of them are explained below.

This is one of the most common signs that appear on a patient that is infected with Ebola. Fever occurs when the body temperature increases above the normal range of 36.5 to 37.5 degree Celsius. For patients with fever, they usually experience discomfort.

Having a fever is usually an indication of another emerging and underlying condition therefore it is important to request a check up from a qualified health physician.

Severe headache is another sign and symptom of Ebola that individuals should watch out for. Severe headaches cause extreme pain around the top and sides of the head when one is affected. Having a severe headache may necessarily not mean that you have Ebola but it is highly advisable to seek medical treatment and testing from a qualified medical personnel.

Muscles form the building blocks of our bodies together with the bones and other body fluids. It is one of the early symptoms of Ebola and when one is infected, they will experience muscle pain around various limbs of the body.

This is a condition where an individual passes watery stool and may at times be accompanied with spots of blood. Diarrhea is classified into three types namely

This usually occurs when something in the body is drawing water. A good example is the presence of sorbitol, a sugar substitute. Sorbitol is found in sugarless gum and is known to cause water withdrawal leading to diarrhea.

This occurs when the body starts to release water into the bowel and is usually as a result of an infection from a disease.

This occurs when pus and spots of blood are found in the stool. It may be caused by inflammatory diseases but Ebola may cause a patient to experience it.

This is a feeling of exhaustion or tiredness which is as a result of lack of energy or strength. When a patient is affected with Ebola, symptoms like diarrhea, muscle pain and fever may lead to a lot of discomfort therefore eliminating the chances of a patient getting enough rest and sleep. Being too tired leads to fatigue.

Weakness is a state where the body lacks physical or muscle strength that is vital in helping one to achieve several tasks. Weakness occurs in patients with Ebola when they have started to experience diarrhea. This symptom is known to cause dehydration of body fluids therefore making one to feel weak.

As one of the signs and symptoms of Ebola and also one of the facts about Ebola, vomiting is the throwing up either voluntary or involuntary of stomach contents through the mouth. It is known to cause body dehydration and may lead to weakness and fatigue.

Abdominal pain is one of the symptoms of the disease and usually occurs when muscles around the stomach contract leading to pain. This may be caused by both extreme diarrhea and vomiting.

As one experiences the early signs of the disease that is vomiting and diarrhea, the body is usually robbed off its body fluids. Throwing up and stomach pains may lead to a patient not consuming any solid food which eventually will lead to severe weight loss.

When the body loses a lot of weight, the immunity becomes very weak therefore leading to death from the viral infection.